Scouts of the Legion

When I was a boy my older brother Johnny was a Boy Scout when he was a teenager - he went camping and hiking and wore that awesome green uniform and had a sash covered in accomplishment badges... and he was just cool... and I wanted to do all that  and learn all that camping and wilderness stuff... I wanted to learn to be an Indian... and live in the woods in a tee-pee... I thought that was what scouting was... and I wanted to be just a little bit like Johnny back then as well... but I was too young to be a Boy Scout - for boys my age we had to first be Cub Scouts - and our uniform was blue... not quite as cool... The biggest reason I wanted to become a scout was because I wanted to learn useful manly stuff - I was curious and longed for adventure... see, there was no park in our neighborhood and like all the other boys, dad worked all the time... my step father was always on the road - he was a truck driver and had his own company... and I wanted some sort of bonding with other kids that I could have something in common with outside of school - I was not much into sports as a boy, mostly because no one encouraged that in me... I was in the track team in elementary school and ran in the track team when my family lived in Odessa for my junior high... but left track behind when we returned to El Paso... track and field sports are mostly a solo effort , other than the relay team... you are competing as an individual with others... and scouting, of course, had sporting competitions back then... and  I wanted encouragement for something... from someone - back then... and I thought I would find it in scouting... so I joined... along with all the boys from the neighborhood - seriously... all the boys from the neighborhood made up our troop... we were now a unified gang dressed in blue ready to take on the woods...

Yeah... that didn’t happen... we never went on a camping trip... the mothers we were trying to get away from to become men were the mothers that were running the troop... (long sigh here...) My mother mostly... she was one of  the ‘den mothers’ - there were no male scout leaders for us... no ‘den fathers’ - there was one kids dad who would come to teach us some things but he was an ex-marine and thought we were marines and treated us like we were in boot camp... other fathers would come to teach us different skills like wood carving and leather working... but we had no regular guy there for us... we were boys looking for male leadership because our own fathers were busy putting food on the table and keeping the lights on... the women didn’t know anything that they weren’t reading from a manual... it was not what we thought... not want we were looking for and not what we wanted... many of the boys became disillusioned and came to the group meeting less and less until the troop was disbanded for lack of members participating... including me...

I would be twenty one years old when I would go on the camping trip that got be interested in the scouting life again - that trip I took with Jerry and his cousin... when I cut my hand open... we didn’t know what we were doing really - a herd of cattle came through camp... some creature ate our food... it was cold and uncomfortable... and I slit the palm of my hand open... I loved it... the others... not so much and before the second night they packed it in and we left... but I had that bug in me... and I wanted more... and whenever I could... I would go hiking in the mountains or in the valley or go into New Mexico and go on a scout just be my self... no one knew and I didn’t care that I didn’t know what I was doing... I was going to learn what I could on my own - as everything else in my life... I was finally going on those adventures I dreamed of as a boy - and for me the adventure is always not knowing what is going to happen... so, since I was twenty one I have secretly gone on scouts - camping trips on my own... whenever I have the opportunity... and I have learned the most important thing in life from it - trust my instincts... trust the voice inside of me... Confidence comes from success - it comes form accomplishing something... the more you accomplish the more successful you will become and that gives you more confidence to accomplish more... it’s a continuous circle that you don’t want to break once it starts - but it does break from time to time...  Listening to that voice inside of me and trusting my instinct would take another ten years before I applied it to everything else in my life.

I was a supporter of the Boy Scouts of America up until the point when they changed their policy on homosexuals... on principle I had to pull my support and backing... for the scouts were there to teach the young men to be morally straight and this new policy goes against that teaching... I do not know what the Boy Scouts stand for now days... but I know what it was when I was a boy... when I wanted so much to be one of them... but I know... that to save it... as the rest of the chaos... it must return to what it was...

If this legion we are building ever decides to implement a program for boys - a program that will instill in them the foundations of ethics and principles and strong morals... a program that will instill in them the virtues of a simple life based on a chivalric code... and that will help boys enter into man hood with ritualistic ceremony and give them rites of passage into an eternal brotherhood... If this legion begins a program for boys that will teach them to honor and cherish the traditions of their people... their culture and faith... I will support such a program and protect it... for the future needs the kinds of men that scouting can produce... if this legion starts such a group and picks up where the Scouts left off and can return it to what it was... I know those boys that participate will become great leaders - if not, great followers... but they most certainly need to learn to be boys... and be as boys must be - curious and adventurous and free. 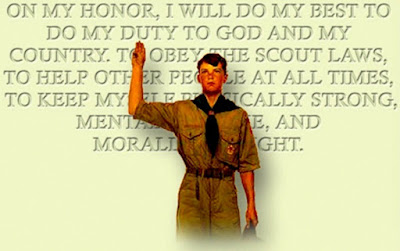 On my honor, I will do my best
To do my duty to God and my country and to obey the Scout Law;
To help other people at all times;
To keep myself physically strong, mentally awake and morally straight.

Do a Good Turn Daily 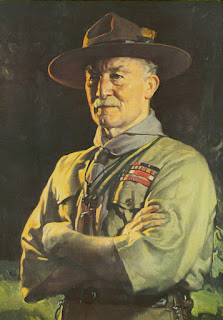 My son loves scouting. He started out as a cub scout and now he's working on his Eagle. Luckily for him and the other boys, they had plenty of male leaders. My husband is one of them. He's also an Eagle Scout. Many of the boys--now young men--have been friends since 1st grade. They love the outdoors!!! I agree---the decision to allow homosexuals stinks big time. Now, scouting overall is first about sexual orientation! However, we the parents refuse to abandon our outdoor lovin' young men. The troop is church-sponsored so we don't have to allow gay leaders---for now.