Just a little patch of land with enough room to grow some corn on, perhaps a grove of apple trees and pecan trees... a corner in the back to grow some vegetables and a  fig tree... some chickens and lambs.  Just a little patch of land with enough space to build houses for your children when they get older and start a family of their own and everyone has enough food from your garden, everyone pitches in a little bit of money for whatever other supplies are needed... perhaps you have a business that your sons are part of, some sort of service or manufacturing that you do and all expenses for everyone are paid out from this family income.  It is not unusual to still find families in Mexico or Central and South America where several generations of one family all live together, sharing one property.  I know you can still find them in the middle east and in Asia... but not so much in Europe and America.  I once was told - and I believe it to be true - that the quickest and easiest way to create wealth is to do so as a family - one unit, one tribe against the world... it worked for those families that seem to never loose their wealth, but they were not raised like you and me... they were not raised like middle class children or like lower class children... they were raised to believe it is them against the world... and these families have a family home to go to if and when it is needed... most American middle class parents charge their children rent to live in their homes after they turn eighteen or if they have to return... but instead of teaching their children something that will help them in the real world, most parents tell them to go to collage and start life as adults in debt - well, they didn’t know any better... and they really didn’t have anything to teach their children anyhow. But do you want to repeat those same mistakes with your own children or do you want to teach them something... do you want to have something to pass down to them... something you can build together as a family that will last for generations?

Most Americans, most Christians, do not even know who their cousins are - not their first cousins not their second cousins, and ask them to name their great-grandfathers and they will draw a blank... why is that?  Why are  Americans and Europeans made to feel guilty about being white and made to apologize for events in the past that they had nothing to do with yet, not know where they come from... who they come from... I suppose for you it might not matter if your grandchildren do not remember you or know anything about you when you die, or that you leave no legacy behind for them... after all, you will be dead and you got yours... right... but... history remembers those who  met destiny head on... we might not know all of their names, but we remember their generation... we remember their clans and their journeys and their hardships... we remember the cities and the culture they left behind... we remember them by their music and dances and the stories of them... I think about it and wonder if it is only just a few who are called upon by destiny to play a part in the shaping of  history... madmen... poets... revolutionaries and wide eyed visionaries... those fools that others laugh at... the ones that wont conform... the ones that dream of it and obsess over it until they have to do something to make it real... the automobile... planes.. Computers... rockets... the wheel... in the big picture of history, those few men that we remember, and the ones we can’t, that changed the world, are but a very small fraction of the total number of lives that have come and gone... but what they left behind... what they left behind...

I do not believe that we - man - have reached our peak... I refuse to believe that... and that we still have  many more dreams left in us to make into reality... but there is just so much fear of upsetting the herd... of being cast out and shamed and insulted for the things you believe in... people fear rejection and they fear failure... they probably fear the laughter and humiliation  that comes from the failure more... mostly because that laughter comes from your own family - those closest to you... your friends, your loved ones... the ones that should have been helping you to succeed... instead of hoping that you fall on your face... they want you to conform they want you to be just like them... I  know... I  still get it from my own family... but... destiny is chasing me... I just can’t run anymore... I must meet it head on... and I know... what ever history says about me when I am gone - be it good or bad... will be better than not being remembered by my grandchildren... for I will leave behind a legacy... I will leave behind something those that come after me can have pride in... I will leave behind something that they will want to carry on - something that will give them identity that separates them from the rest of the crowd - honor, nobility... courage... I will leave behind a home for them and give them the skills that they will never have to wait in a bread line or grovel before a bureaucrat... they will have ethics and strong principles... they will work hard for their share and they will be rewarded abundantly for it... they will know their cousins... and they will be one tribe against the world... and they will say... “grandfather built this for us...”

Yes... Destiny is coming into focus... 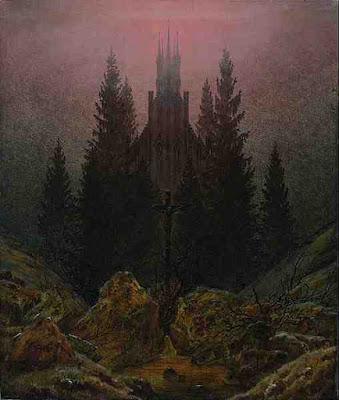 The Cross in the Mountains
by
Caspar David Friedrich

Going back generations on my grandfather's side . . . they bought land--a lot of it---and houses were built on it. In fact, they even had their own church and owned many businesses in Waynesboro, MS. When someone got married, a house was built for them on the family land. Sadly, after many, many years it fell out of inheritance. It was supposed to go to my grandmother but it got lost somehow in a divorce situation. If you ever acquire the land you want, I hope it doesn't go to someone outside of the family many, many years after you pass away.