Email ThisBlogThis!Share to TwitterShare to FacebookShare to Pinterest
Labels: Poetry 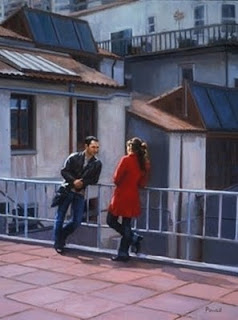 I stood on the platform and waited for those arriving to disembark. Tired and weary travelers coming from the south... or from Spain. They bump into me and they shove me out of their way not caring to stop and go around me... they do not even notice that I am standing there... I am a phantom... I am a shadow of an affair that ended all too soon... I breathe in the putrid night air poisoned by stale perfume and bitter wine... and the echoes left behind by those would be artists that came before me... I let go a sigh... and watch it float away to the other end of the station.
I picked up my bag and made my way to the train... stopping at the entrance, I force myself to look down the platform to see if she came to say goodbye... and then I remember... I never told her I was leaving. I step in and find a place to hunker down... A place to make the center of my universe until I reach Berlin.