In the Land of the Savage

There is a place where only a savage dares to go. A place far from the soul killing crowds of a city and the dream destroying beast of traffic, where there are no cell phone towers and internet...  no electric light, no running water from a tap, no coffee shop with over priced stimulants and pretentious self proclaimed intellectual do-gooders competing to apologize for their ethnicity and deny what is left of their culture and abandon any thing that resemble traditional gender identity...

That place where only a savage dares to go lays deep in the stillness of a lonely forest lit only by the streams of light that found a passage through the thick leafy blanket floating under skies filled with so much blue that jet liners could not penetrate them.  In this lonely place the traffic scurries around a bush and scampers up a tree.  In this land of the savage the sound of the city is replaced by the song of the wolf at night and the robin looking for the day light to break through the branches.  In the land of the savage there is no over paid, ungrateful bureaucrat waiting for you to kiss their ass for a building permit or license... you simply pitch your tent and gather up wood for your fire.  There is no rush tomorrow to catch your train or bus or beat the other monkeys to get on the fast lane... you will rise with the rest of the creatures of the wild... you’ll eat when you get hungry and rest when it pleases you... wander about with no agenda and explore this world of green and brown, of stone and soil, rivers and hills and hidden dips in the terrain that lead to other hidden places.  You chase the deer and the fox and try to learn the song of the blue jay and the call of the raven.  You swim in natural waters and wash away the stench of the modern world and contemplate the name of God as you float on your back and try to remember what it was like to rely on another for money to pay your rent and keep food on your plate until you begin to deny such a life could ever have existed let alone had been the sort of life your creator intended for you - for you are savage and you belong in bare feet or at the very least, footwear you fashioned for yourself from the skins of last nights meal.  You run through the dense brush just to see how fast and how far you can go before you turn back around to try to find your way back to  camp - but if you don’t make it back for a couple of days - you don’t care, because there is no one there to care about you - for you are savage and you belong to the moment and destiny’s reward is honor, and glory is the drink she pours in the cup for the man that lives his life without fear.

You are savage and you hunt the bear and the antelope with spear and sling, with bow and arrow, with stealth and patience, with steady heart and painted face - for you are savage and you belong to the deep forest mist and the smoke and  the ash and the blood and the sweat of natures initiation and the music of the dance is the chant of the nymphs and the sprite and the daughters of Phaleg beating on drums and ringing bells... you are the prince of the Oak and the priest of Atlanteia’s altar, the marshal of green valleys and the strength in the hickory spear.  Your crown is a garland of ivy and your robe the coat of the white bear.  You are the whisper of Autumn’s last breath and  the shadow of Jegudiel... You are savage, chief of forgotten angels, master of outcast demons, your tribe is the rain and the fire, the wind and the hail, the thunder and the lightning. Your brothers are Azrael - the giver and taker of life, Abaddon - the destroyer, Apollo  - the sun of pagan Zues... you were born to tear down the world you were born into and build a better one in your image, to conquer the lands of other savages and build your temples over theirs as they built over the temples of the savages they once conquered...

You are savage... the dance of fire waits for you... the hunt is calling you... the quest for glory saves a place for you... the thunder in your heart is the legion anticipating your return to the field of battle... the restless tilting of your soul is the howling of steal waiting to be forged for your brutal swing at the chaos of the progressive civilized world... that big empty hole inside longs for a fight that pushes you to the edge of dishonor... a brutal, ruthless, barbaric war that fuels the hungry lust for blood of Satan himself... a fight that raises demons and calls down angels and all manner of wandering spirit in between... that pounding pain in your head is the thundering echo of rage struggling to be unleashed on the ungrateful, lazy, obese, self-entitled weaklings that only consume and leave nothing but their filth and the waste of their consumption to pile onto the landfill that is their cities.

The land of the free man is the land of the Savage and if you dare wander into it all that is required is faith in yourself, a belief that God has filled you up with thousands of years of instinct waiting to come out, a sharp knife and a strong axe, a little imagination and skills enough to keep you warm and out of the elements, the will to feed yourself... but just in case, pack some beef jerky and matches.

You are here because a savage up in your family tree had the will and the balls to travel to a new world and conquer for himself a woman to have children with.

The path of the free man - the Savage, is not an easy one, for it requires you to let go of your fear - fear is the thought of losing that which you think you need - money, a home, a car, a job, belonging, approval... all of it, and when you have let go of the things you think you need, you are free from the world and reborn a Savage  - the destroyer, giver and the taker of life, the son of the pagan, who’s glory is only  outshone by the sun. 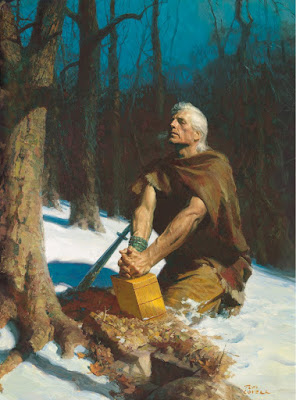 Email ThisBlogThis!Share to TwitterShare to FacebookShare to Pinterest
Labels: Bachelor Ways, Blog Entry, Fiction (kinda'), Letters to the Legion, Side Notes (comments on other sites)