To  C.S. Lewis who said that myths were lies and therefore worthless, even though ‘breathed through silver’.

You look at trees and label them just so,
(for trees are ‘trees’, and growing is ‘to grow’);
you walk the earth and tread with solemn pace
one of the many minor globes of Space:
a star’s a star, some matter in a ball
compelled to courses mathematical
amid the regimented, cold, inane,
where destined atoms are each moment slain.

At bidding of a Will, to which we bend
(and must), but only dimly apprehend,
great processes march on, as Time unrolls
from dark beginnings to uncertain goals;
and as on page o’er-written without clue,
with script and limning packed of various hue,
an endless multitude of forms appear,
some grim, some frail, some beautiful, some queer,
each alien, except as kin from one
remote Origo, gnat, man, stone, and sun.
God made the petreous rocks, the arboreal trees,
tellurian earth, and stellar stars, and these
homuncular men, who walk upon the ground
with nerves that tingle touched by light and sound.
The movements of the sea, the wind in boughs,
green grass, the large slow oddity of cows,
thunder and lightning, birds that wheel and cry,
slime crawling up from mud to live and die,
these each are duly registered and print
the brain’s contortions with a separate dint.
Yet trees are not ‘trees’, until so named and seen
and never were so named, tifi those had been
who speech’s involuted breath unfurled,
faint echo and dim picture of the world,
but neither record nor a photograph,
being divination, judgement, and a laugh
response of those that felt astir within
by deep monition movements that were kin
to life and death of trees, of beasts, of stars:
free captives undermining shadowy bars,
digging the foreknown from experience
and panning the vein of spirit out of sense.
Great powers they slowly brought out of themselves
and looking backward they beheld the elves
that wrought on cunning forges in the mind,
and light and dark on secret looms entwined.

He sees no stars who does not see them first
of living silver made that sudden burst
to flame like flowers beneath an ancient song,
whose very echo after-music long
has since pursued. There is no firmament,
only a void, unless a jewelled tent
myth-woven and elf-pattemed; and no earth,
unless the mother’s womb whence all have birth.
The heart of Man is not compound of lies,
but draws some wisdom from the only Wise,
and still recalls him. Though now long estranged,
Man is not wholly lost nor wholly changed.
Dis-graced he may be, yet is not dethroned,
and keeps the rags of lordship once he owned,
his world-dominion by creative act:
not his to worship the great Artefact,
Man, Sub-creator, the refracted light
through whom is splintered from a single White
to many hues, and endlessly combined
in living shapes that move from mind to mind.
Though all the crannies of the world we filled
with Elves and Goblins, though we dared to build
Gods and their houses out of dark and light,
and sowed the seed of dragons, ’twas our right
(used or misused). The right has not decayed.
We make still by the law in which we’re made.

Yes! ‘wish-fulfilment dreams’ we spin to cheat
our timid hearts and ugly Fact defeat!
Whence came the wish, and whence the power to dream,
or some things fair and others ugly deem?
All wishes are not idle, nor in vain
fulfilment we devise — for pain is pain,
not for itself to be desired, but ill;
or else to strive or to subdue the will
alike were graceless; and of Evil this
alone is deadly certain: Evil is.

Blessed are the timid hearts that evil hate
that quail in its shadow, and yet shut the gate;
that seek no parley, and in guarded room,
though small and bate, upon a clumsy loom
weave tissues gilded by the far-off day
hoped and believed in under Shadow’s sway.

Blessed are the men of Noah’s race that build
their little arks, though frail and poorly filled,
and steer through winds contrary towards a wraith,
a rumour of a harbour guessed by faith.

Blessed are the legend-makers with their rhyme
of things not found within recorded time.
It is not they that have forgot the Night,
or bid us flee to organized delight,
in lotus-isles of economic bliss
forswearing souls to gain a Circe-kiss
(and counterfeit at that, machine-produced,
bogus seduction of the twice-seduced).
Such isles they saw afar, and ones more fair,
and those that hear them yet may yet beware.
They have seen Death and ultimate defeat,
and yet they would not in despair retreat,
but oft to victory have tuned the lyre
and kindled hearts with legendary fire,
illuminating Now and dark Hath-been
with light of suns as yet by no man seen.

I would that I might with the minstrels sing
and stir the unseen with a throbbing string.
I would be with the mariners of the deep
that cut their slender planks on mountains steep
and voyage upon a vague and wandering quest,
for some have passed beyond the fabled West.
I would with the beleaguered fools be told,
that keep an inner fastness where their gold,
impure and scanty, yet they loyally bring
to mint in image blurred of distant king,
or in fantastic banners weave the sheen
heraldic emblems of a lord unseen.

I will not walk with your progressive apes,
erect and sapient. Before them gapes
the dark abyss to which their progress tends
if by God’s mercy progress ever ends,
and does not ceaselessly revolve the same
unfruitful course with changing of a name.
I will not treat your dusty path and flat,
denoting this and that by this and that,
your world immutable wherein no part
the little maker has with maker’s art.
I bow not yet before the Iron Crown,
nor cast my own small golden sceptre down.

In Paradise perchance the eye may stray
from gazing upon everlasting Day
to see the day illumined, and renew
from mirrored truth the likeness of the True.
Then looking on the Blessed Land ’twill see
that all is as it is, and yet made free:
Salvation changes not, nor yet destroys,
garden nor gardener, children nor their toys.
Evil it will not see, for evil lies
not in God’s picture but in crooked eyes,
not in the source but in malicious choice,
and not in sound but in the tuneless voice.
In Paradise they look no more awry;
and though they make anew, they make no lie.
Be sure they still will make, not being dead,
and poets shall have flames upon their head,
and harps whereon their faultless fingers fall:
there each shall choose for ever from the All. 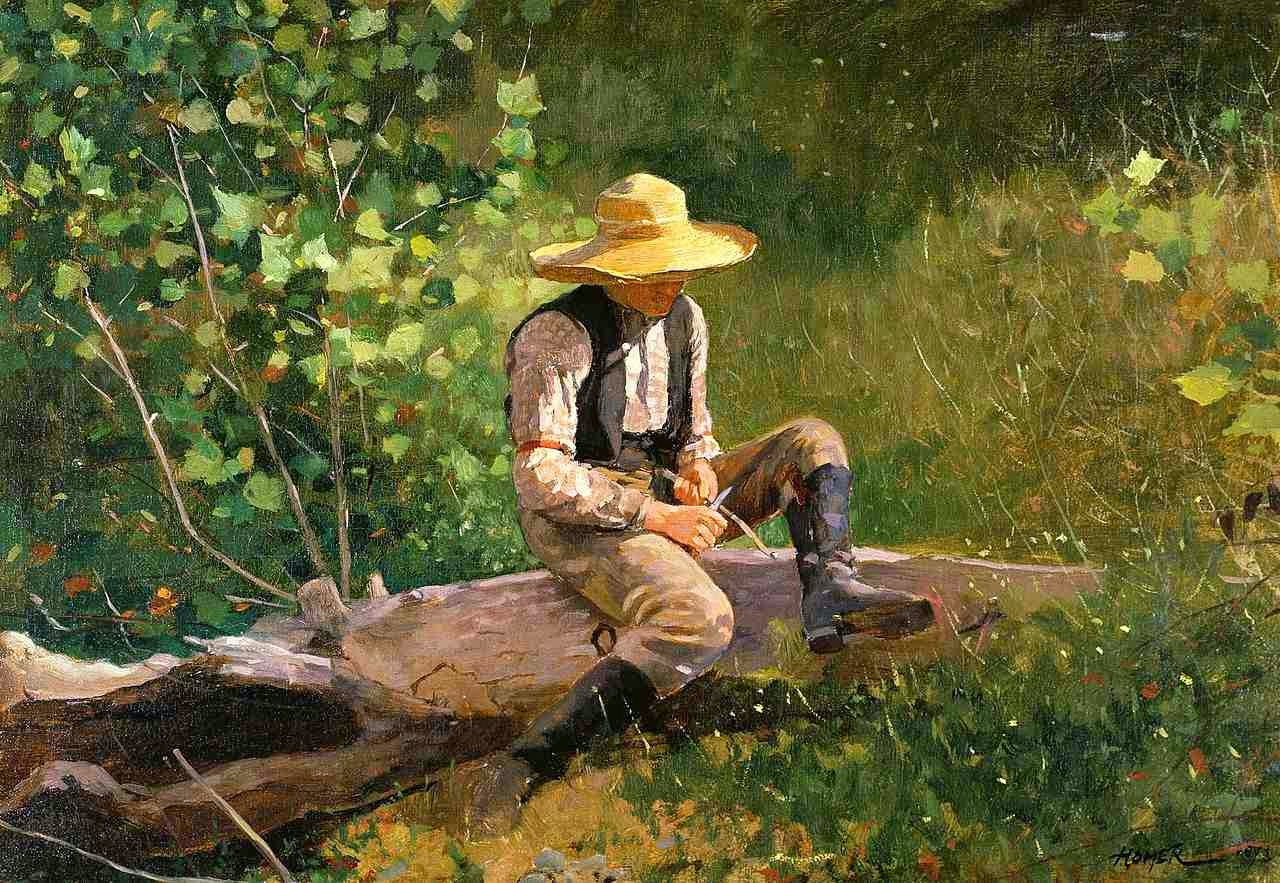 The Whittling Boy
by
Winlsow Homer
Posted by dash deringer at 10:32:00 PM

Hi. Yes, it's me. OMG, I just received my first comment!!! Someone is actually reading my journal. I'm live, baby!!

If I could get 10% for every beast I inadvertently created...