Confessions of a mad poet 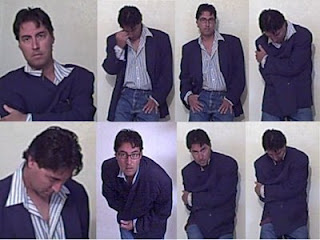 When I was a boy I wanted to be a sailor because my grandfather - my father’s father - was a man of the sea - and I always wanted to be like my father’s father... I, unfortunately, have become too much like my father. As I got a little older I wanted to become a journalist and then an architect and also a fashion designer. At one point in my life I had convinced myself that I wanted to be in the entertainment industry and for some reason I felt I belonged in advertising... well, when I got into advertising it took a while to realize this is not what I want to do... so I left to do what it is I really want to do... I tell people I am a graphic designer but I have not done anything of the sort for quite a while now... I am making money... and I am not suffering... and I think this will make me happy... if I could just be more like my grandfather.

Some time ago I abandoned my material possessions. I took a good look at my life and I did not like what I found - I did not like the person I had become and I knew that the things I had - actually had me... I wasn’t going to be like that... I wasn’t going to live like that. I did not need those things and I no longer wanted them... so out they went along with whomever I was when I had them.

My life has gone through many phases in search of happiness and the one thing that will complete me. I have filled my body with a wide variety of substances from cigarettes to liqueur and every herb and non-medically prescribed drug I could get my hands on... the reason... to forget... and to avoid... I have not been drunk in a while though I do have a drink from time to time. I have not had a cigarette in about two years - it made me sick and it had been about a year before that one that a had quit cold turkey... I think I have done pretty good in the not smoking part - as for the drugs I wont go near them - I have nothing against pot and people who chose to smoke it - that is your own business. I wont preach to people that use illegal drugs as I have used them myself and as no one told me to stop using and no one helped me to stop using... you make your own choices... right. I have never been into any rehab or joined any AA type groups - that is not for me... you’ve got to have some serious problems with in your self to not be able to solve your own problems.

I have searched for that missing link that would bring me closer to GOD in religion and in the occult. I have taken vows of blood and dedicated a good part of my life to the service of clandestine brotherhoods whom shall remain nameless but their secrecy and their ridiculous rituals left me, in the end, nowhere closer to the answers I was seeking, though, many questions were answered and my eyes opened to the truth of many things... my GOD and I remain strangers waiting to find each other.

Women... there have been many - I do not say that to be boastful but out of regret - and know that I regret very little in my life - regret that there has had to be so many in my search for the one... yes one... just one damn it! Why does it have to be so God damn hard to find the one?!?! - I know deep in my heart if I was a married man today that I would be a completely different man - with all those material possession that I have forsaken... because no woman that I have met yet could live without them... or at least... I have not met a woman yet that has not judged me by the things that I do not have... so, no woman has been able to stick around long enough to see the things that I do have - and that is my little secret. I have known many women that told me they longed for a life of adventure - but when offered the opportunity to leave their life and start anew in a different place - a place they have longed to see -"just leave everything behind... we’ll go tonight" - they all said no... all but one... they all said no...the only woman who did put that much faith in me came along at the wrong damn time... and I think of her often... and I hope she is happy. I keep looking for the one in the lips of all the ones that happen to land in my arms... I keep looking in the eyes of the ones who stay until the sun comes up... I keep looking.

I am not a rich man. I am a poor man with money - but I do not want a woman who simply wants me for the money that I may or may not have... she will have to have faith in me... that I will provide for her, that I will take care of her, that I will love her and desire her... and I will...
Posted by dash deringer at 8:52:00 PM

They say that when we stop looking, and the wanting is forgotten by the natural ways...then it can happen, but even then we still wander...

You are more like your grandfather than you realize...men of the sea are wanderers...my father was, as I...

Lucy's free counceling, only a nickle

Oh, there is the reference to the occult. Vows of blood and brotherhoods---sounds like The Divine Secrets of the Ya-Ya Sisterhood. To that, I say ya-ya and ya-ya. I take it you have left them alone for good.
To say they lack spirtual understanding would be an understatement. Sometimes answers have a way of finding you when you're not looking.

You would be shocked and surprised to lean the kinds of people - in-fact the very "important" people that are members of occult organizations... it is not something to take lightly... that is all I am saying... this subject is now closed.

I just read this comment. I've been busy. The subject is now closed . . . they do lack spiritual understanding. To say they don't, shows your lack of understanding when it comes to God. These kinds of people have been around since the beginning. Ecclesiates 1:9 "What has will be again, what has been done will be done again; there is nothing new under the sun."

The occult is not of God. The answers that you seek can only be found in the Bible and in prayer. God will continue to be a stranger to you as long as you continue to look for Him in places where His Spirit is not welcome. As far as very important people who are members of occult organizations, it wouldn't surpise me really. This world is screwed up and I'm sure they're not helping.

And, as you know, this world is a temporary place. Romans 14:11 "For it is written, As I live, saith the Lord, every knee shall bow to me, and every tongue shall confess to God." Even if they chose not to follow the God of Abraham, Issac, and Jacob in this lifetime, there will come a time when they too will bow before God Almighty and proclaim his name.