excerpt from a letter to a friend

When I returned to the States and I was old enough to better understand what was happening, I thought I was going to be a cowboy - we moved to Texas, my mother had remarried a cowboy,  my teachers all spoke with a heavy Southern accent, my favorite shows on t.v were cowboy reruns - though I didn’t understand them, and everywhere I looked in Texas there was a cowboy ready to offer a hand - that was my America when I was a boy  - the United States of America was a land for Cowboys - New York and big cities like it were foreign lands for a different kind of people - foreigners as far as I was concerned, because I was here to become a cowboy, and if you weren’t a cowboy then get your ass out and go to New York or Los Angeles with the Chinitos (Spanish for Chinese) and the cab-drivers  - when I was a kid I thought all foreigners drove cabs in big cities, but I was a Mexican half-breed and thought all Mexicans did the jobs my father did - drive trucks, work on oil rigs, and factories, and do all the heavy lifting... I miss my childhood innocents... that was my America - all the Mexicans were cowboys in that America and all the cowboys were heroes - sure you had a villain cowboy now and then, but they served their purpose - because you can’t have a hero without a bad guy.

The cowboys of my young America were the ones out of my favorite shows - Bonanza, the Rifle Man, Gun Smoke, Wild Wild West, Zoro, The Lone Ranger.  It wasn’t until I got older that I figured out why there were so many Western shows on t.v. - the world was changing fast and America needed to hold on to the values being taught in these shows - we need men of these type to see us through the coming changes of the modern world - men of strong character, of integrity, of strong morals, and dignity, men who will not complain through the hard times but do what has to be done here or over there - wherever they need cowboys to save the day, men of strong spirit, adventurers and wandering dreamers - pan-handlers and miners and cattle men, and rail-men, men like the ones that left the cities in the East to cross America and tame the wild West, and carve out the land into new cities - those men are very few men today... those men went to Europe to fight the Kaiser, and later to fight the Socialists, and the Fascists, and the Empire of Japan... “the cowboys are coming... those crazy fucking Americans!”  We got the job done and left like silent heroes back home to our families, but after the second world war the cowboy days were over - for the business man in the big city had figured out by now that there was big money to be made in the business of war - enter the conflict in Vietnam - there were few cowboys fighting in that war and  the ones that made it back were broken... and the world had changed... and all we could do was try to hold on to our cowboy days and our cowboy ways by creating television shows to help pass down the traditions of these forgotten “knights” as you called them, down to dreamers like me and men of destiny wandering the world looking for a fight.

How could the world not love the cowboys of that young America - they worked hard all day and drank hard all night and did it all over again when the sun came up, and if a problem popped up the cowboy took care of it like a man - with integrity and a quiet confidence like a man, he sought no reward or fanfare for his assistance and just went back to his life before the interruption.  I think there is still room left in this world for those cowboys and I think the world wants more of them to come in with the dust and fire and thunder of war to save the world from itself - the world is weak and frightened and to scared to speak up for fear of losing the little that they have.

Have you ever watched the film “The Magnificent Seven” - not this new remake (I have no desire to waste my money on that), but the old Steve McQueen, Yule Brenner one - it too was a remake but a great one for the changing world - here is a modern interpretation of it -

There is a little village called Sweden, and outsiders have come to take all they can and give nothing back - these outsiders provide no protection, they add nothing of value to the community, and they rape as they please - no one is going to stop them and any one who raises their voice against these bandits is silenced out of fear of offending the outsiders  - in the film the leader of the bandidos states his case when he says - I have to feed my men.  The men of the village of Sweden are broken and weak and docile, spineless and have no trace of courage in them - they are poor farmers but they can not carry on this way any more - they have hidden their daughters from the world and are running out of food for themselves - “we will see the old man” one of the villagers says, “he will know what to do...” of course, an old man at the end of his life who grew up in a generation that new harder days tells them to go out and find some cowboys - rough and tough and rude gun shooting cowboys to come and help drive out the invaders... so they travel to a place were cowboys linger... spitting and drinking and playing cards and they say  - “look, we’re pussies, don’t know just how we became this way, but that is where we ended up, we are poor farmers, we know nothing of the world and war - we are children of children and we know as we have been taught (that was from Joe Vs. The Volcano), we don’t know how to use guns and we have no money to pay you for your services, they have taken everything... please amigo, will you help?” Then Yule Brenner, ‘Cris,’ gathers himself a little army of seven and goes to save the village of Sweden, but they can’t do it alone, the seven cowboys need to teach the broken men of the village to be men again, to learn to fight and shoot, and to find their courage or their village and what their fathers left behind for them will be gone forever.

And then comes along Dash Deringer - talking crazy about tribalism and hidden villages and crusades to save Christendom... trust me friends, if you knew me in my wild cowboy days the way I talk today would make no sense to you whatsoever - it is crazy talk people tell me and no one cares and I gotta change with the times - well I did change with the times and I did not like that person, so I became the man I am meant to be - the man I am working on becoming, the man destiny is calling - that man is something like the cowboys of my young American dreams... that young America was built by strong men and women with strong families - it was not made for the weak and the weak had no part in building it... though now we are told  by the mob of the weak that we must hand over more - that’s right, you doing all the heavy lifting must do more so that the weak can have more, you paying the bills must give more so the weak and lazy and unmotivated can have as much as you do, that’s right, you the moral man must surrender your beliefs so that the office slut can have her free abortions on demand... that’s right my friends there was a time when all the world loved Americans - when they saw us as cowboys - but now we are a war machine of zombies who don’t give a fuck except for what’s in it for me - the Russians  think we’re all fat stupid and gay - they don’t fear us nor do they need anything from us.  The Chinese can always find other places to sell their cheap products to - but come on America - you’re never going to stop shopping at Walmart... The Muslim - he has no respect for you and he wants you to surrender yourself to his God or die - he has no problem dying for his God, but the weak man wants you to give him a place among us though he has no intention of assimilating to your culture - he wants your culture destroyed to make room for his and there is nothing you can do about it because you are afraid - are you a Swede my friend or are you going to cowboy up?

The time has come my friends to cowboy up before you go crawling to the Russians to help save your masculinity your culture  and your Church. 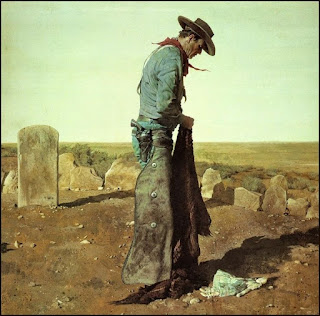 The Searcher
Robert McGinnis
Posted by dash deringer at 4:37:00 PM