A man and the mountain

I can’t remember the story exactly as it was told to me...
but I’ll tell it like this...

The next day as the man was working in his field, three strangers appeared in the middle of his crop.  The man walked to the strangers and they stood in silence for a while and as the farmer was about to ask what the strangers wanted the one in front of the other two raised his arm and pointed to the mountain and said “go move that mountain.”

The farmer put down his tools and walked to the mountain, he looked it up and down and dug his feet into the ground, and he leaned into the mountain, and with every fiber of his being and all the faith in his heart - he pushed.

Every morning before the sun rose the man would make his way to the mountain and look it up and down, dig his feet into the ground... lean into it... and push.  With every fiber in his being and all the faith in his heart.  With all the strength he could force out of his body and all the passion of his soul... with all the will and determination of his mind... he pushed the mountain before him.  With grunts and groans and the howls of a madman, in between whispered prayers... he pushed... everyday before the sun came up until far after the sun went down and the stars came out... he pushed.

The farmer would make his way back home at night with a calm mind and a sore body. He ate a simple meal and rested - for the next day was another day of attempting to move the mountain -
“if only just to silence the voice in my head and keep the vision of strangers out of my field” he would tell himself before drifting off to sleep... but in a secret place in his heart, he wanted to move that mountain.

Days turned to weeks and weeks turned to months and the farmer had abandoned his field and his animals ran wild looking for food.  The farmers wife grew a small garden for the little food they had and was forced to sell what animals she could round up for money, she had to endure insults and jokes from the people in the village and her husband was now a punch-line, and as the story of the foolish farmer trying to move a mountain spread  to other villages, people would come around  to witness his fruitless efforts and throw rocks and insults at him... but the farmer pushed with grunts and groans and howls of a madman... in between whispered prayers... he pushed... and the months turned into a year... and the farmer pushed.

His back had become wider... his shoulders rounder... his hands were so rough now that he could no longer feel the gentle hands of  his wife... they only could recognize the stone edges of the mountain.  He stopped caring about himself and his hair grew out and his beard was unkept, he had forsaken the comfort of his bed, of his home, of the fire in his hearth. He was a man with a purpose, as foolish as it may seem, and though he had lost the respect of the people of the village, his life had a meaning  and he could not turn his back on it now - for it was all the honor he had left in the world.

One morning as the farmer was walking to the mountain he came upon the three strangers and they stood in silence for a while and before the farmer could ask what they wanted the one in front raised his arm and pointed to the mans field.  The man lowered his eyes in shame... and bowed his head in defeat... he turned around and returned to his field.  When the sun came out his wife looked out the window of their home and cried.  By the end of the day the farmer had replanted his crops and gathered up his lost herd... the weeds were dug up, his tools were cleaned and sharpened and he started the repairs to his crumbling roof. The villagers showed no mercy for the poor fool who tried to move the mountain for a year and their jokes and insults only became worse, and when the sun went down, the farmer, defeated by the world and his mind, betrayed by his faith and his heart, slept on the floor of his front room... alone.

The farmer was working in his field one day when he looked up and saw a crowd of strange people coming up the road and the people of the village carrying what they could on their backs - an army was coming, devouring what they could and leaving only the ashes of the towns they destroyed behind... the farmers wife looked at the rounded shoulders and the bruised hands of her husband and  then calmly packed a basket with all the food she could carry and blankets for the two. The farmer slung his quiver over his shoulder with his bow and they followed the villagers up the road... behind him he could see smoke rising from a village beyond his own... the invaders would soon reach his home.

The road they followed led them to the mountain, to a path up the noble ancient structure that led to a pass carved out by time through it - to a valley that would take them to the sea, but when they cam to the pass the crowd stopped in their tracks, for a boulder had fallen from the side of the mountain and blocked the way though to safety.  The women cried and the men cursed, some of the young men tried to climb up the side of the mountain but could not... they were trapped between a rock and an invading army.

The farmer and his wife, who were walking at a gentle pace, made their way to the front of the crowd to the boulder.  One of the village elders said to the man “we have no time for your foolishness” to which the farmer responded to by shoving the elder into the crowd knocking the weeping, frightened villagers down.  The farmer looked at his wife and gently stroked her cheek with the back of his rough, callused hand and turned to face the giant rock... he looked it up and down and dug his feet into the ground... he leaned into it and with a heavy grunting sigh, he pushed at it... and it moved...  He took a step forward and the boulder took a step back... another step forward and the rock retreated and surrendered... and the crowed watched in silence and followed slowly behind the farmer one step at a time as he pushed the boulder back and out of the way to let the people through the pass, and when the last one was through the farmer pushed the boulder back into place to give the people time to get to safety. After  securing the piece of stone in tightly he turned to find the crowd had cleared a path for him and his wife, some women had brought them little bits of their food - bread and fruit for the couple... an old man had brought them a young lamb that he was carrying on his shoulders as a gift... the village elders could only offer their silence and the farmer and his wife, walking at a gentle pace, made their way through the parted crowd and led them into the valley. 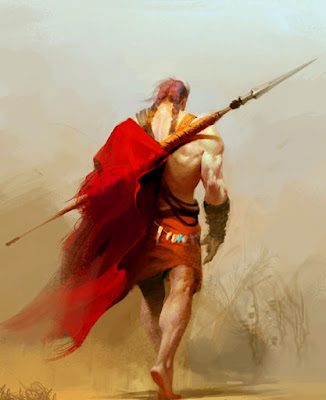 Lonely are the brave
(I do not know the artist)