The Cristero War, also known as la Cristiada, in Mexico (1926 - 1929), was a rebellion of Catholics against the government of President Plutarco Elias Calles and his “Calles law” - a statue which enforced  the anti-clerical articles of the Mexican Constitution of 1917.  The Socialist Calles wanted  to eliminate the power of the Catholic Church and organizations affiliated with it as an institution, and to suppress popular religious celebrations.  Articles restricting the power and influence of the Roman Catholic Church in Mexico have been in the Constitution since 1857 and were carried over into the constitution of 1917.  Mexico was  trying to pull itself together at this point, following the Mexican Revolution, and there were still bands of outlaws revolting against the government in several states, mostly Catholics fighting against Northern Revolutionaries.  President Calles (1924 - 1928) saw this as an opportunity  and as the duty of his administration to enforce the anti-clerical articles - which no one had enforced before, and squelch the last of the rebellions and the power of the church in Mexico.

The Calles Law was signed in June of 1926, which provided specific penalties for priests and individuals who violated the provisions of the 1917 Constitution. For instance, wearing clerical garb in public  earned a fine of 500 pesos; a priest who criticized the government could be imprisoned for five years. Some states enacted oppressive measures. Chihuahua enacted a law permitting only a single priest to serve the entire Catholic congregation of the state. To help enforce the law, Calles seized church property, expelled all foreign priests and closed the monasteries, convents and religious schools.

¡Viva Cristo Rey! ¡Viva la Virgen de Guadalupe! - Long live Christ the King! Long live the Virgin of Guadalupe! Was the battle cry of the  rebels who had little supplies, were poorly armed and relied heavily on the Feminine Brigades of St. Joan of Arc to smuggle guns and ammunition, they raided towns, trains and ranches in order to supply themselves with money, horses, ammunition and food.  Calles’ government was supplied with arms and ammunition by the US government. In at least one battle, American pilots provided air support for the federal army against the Cristero rebels.

The Cristeros  had several victories in their struggle though they were not a military trained organization, but they found success under the leadership of such men as Jesús Degollado, a pharmacist and the rancher Victoriano  Ramírez, along with the priests Fr. Aristeo Pedroza and Fr. José Reyes Vegas, who many considered a ruthless assasin,  perhaps best known for his successful high-jacking of a train carrying money and gold  for the Bank of Mexico. In 1927 the National League for the Defense of  Religious Liberty chose Enrique Gorostieta Velarde - a former General who served under Victoriano Huerta to lead the Cristors and unite the various factions as one army and turned them into a professional military..  Gorostieta was not a religious man, in fact, he was a liberal anti-cleric who held the religious faith of his subordinates in contempt - but he would eventually wear a crucifix  and say that he  relied on God for inspiration and strength. Gorostietas motivations may have been purely personal for choosing to lead the Cristeros - he had political ambitions and he was given a salary of 3,000  pesos per month - about twice the pay of a regular army general.

In the end 30,000  men,, women and children that fought under the Cristero flag died fighting for religious freedom in a country made up mostly of Roman Catholics because of the hatred of leftist liberals. When the conflict was settled between the Vatican and the State there were no Cristero leaders present or involved - nor did they have any support from Rome throughout the fight.

As The Cristiada in Mexico was coming to an end a new anti-religious campaign was starting in the Soviet Union which resulted in the estimated genocide of 12 - 20 million Christians.  People always say ‘this’ will never happen again... ‘that’ will never happen again... but our wars continue, the same conflicts seem to repeat themselves only the participants have changed.  It has only been 87 years since the Cristero War ended and now the conflict in Europe has begun, and make no mistake, it is a war, it is a new Cristiada and the Christian rebels of the new conflict have no support from the Church of Rome, their Governments have rejected their own culture and traditions and national identity and pride have all but been outlawed.  The tolerant liberal left seems to always go after the Christians, it is a progressive ideal that faith and tradition must be   stamped out in order to fulfill the utopian dream of equality. But Christianity endures, as empires have risen and fallen, as socialists and communists have come and gone - the faith has remained.  But today there is a struggle with the church itself and we are seeing a lean to the left, many would say an abandonment of the principles of Christianity, and it is not very hard to deny that the church is, and  has been for some time, under the wrong leadership.

One does not have to look very hard for evidence of infiltration of the church by feminist and liberal ideas, the presence of homosexual and highly effeminate priest alone is enough to make traditional men leave - and it has.  The fact that the church is catering more to the women instead of strengthening the faith of the men is the main reason why this writer left the church. But what might be the most disappointing and troubling act of the modern church is the request of our leader for Europe to take in refugees of a religion in conflict with our own into their own homes and its very weak response to recent events in Sweden, Germany and France.

It is time for the men of Europe to rise up and protect their communities form the invaders brought in by your own governments. It is time you form bands of warriors to take back your towns and defend your women and children as those paid to protect you will not.  It is time to push back twice as hard and with twice as much brutality as those who have come to take all that you are not willing to protect.  If Europe is to remain Europe and it’s cultures and traditions are to survive the time to rise up and defend it is now - you will have no support from your government to protect it and you will have no support from the Vatican.  Men have come to your lands, Europe, that are not afraid to die for what they believe in, they are not afraid to take by force what you will not defend.  As your soldiers have gone to liberate their lands, men who should be back home fighting for a better life there have been brought in to replace you and change the face of your beautiful countries.

The Time is now Europe.  I  pray you unite under one banner.  I pray a leader will come soon to restore pride and honor and inspire strength and nobility in The people of your nations.  All the wars of your past and destiny have been to prepare you for this last fight Europe, the blood of your fathers and ancestors cries out to you from the shadows of history. So rise, and fulfill your destiny.

Europe and The Church do not belong to its politicians and bishops and priests -  it belongs to those that built it.  It belongs to those that support it and look to it for guidance and inspiration and a moral compass, it belongs to those willing to defend it and preserve its traditions and teachings. The new Cristiada will not only cleanse Europe and the Americas. It will  - and it must - also cleanse the church itself and return it to its true purpose.  The Catholic church is only as strong as the faith it inspires.  Those of us who have left and those that practice their fath with in the church must take a more active role in the direction of the church as we must start taking leadership roles within our own communities if Christianity is to continue to endure. 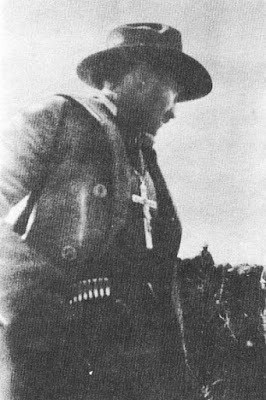 Cristero General Enrique Gorostieta
Posted by dash deringer at 7:04:00 AM

Something tells me that if Cristetos were coming over the border that liberals would be clamoring to build a wall.

Something tells me that you might be absolutely right.

Leftism reminds me of a virus the way it adapts and changes. They've discovered outright stomping out of morals and such isn't the way to go but rather gradual encroachment. Today the pope or whoever says Christians should be tolerant of gays because Jesus loves, tomorrow should be tolerant of Muslims, the next day should give up their lives. It is a never ending process. Leftism also reminds me of a snake as in it cannot be destroyed unless the head is struck down. Leftism has fallen and risen through the ages yet keeps coming back. Of course the faith has held firm as well. There is truly an eternal (or so it seems) struggle going on in the world. One that we have a pivotal role in playing. When I go before my creator I want to do so with my head held high knowing I fought the good fight and did now bow before the minions of darkness whatever form or garb they may have taken. Great article Dash.

"When I go before my creator I want to do so with my head held high knowing I fought the good fight and did not bow before the minions of darkness" - the only way we can do that in the next life is to be men in this life... be men and stand up for that which we believe in and make no apologies for it... you are fighting the good fight by helping men become better and spreading the truth.

Fine post. I'll put up a link to it in Crusader Rabbit comments.

And for the other thing... sometime this week-end I may be posting a statement on the matter... too many strange things seem to be happening at one time including the sudden influx of inquiries about Simon.

Thanks Dash. I look forward to reading it. My paranoia makes me dislike mysteries.